For some time I have been aware of a much hyped product which was due to be released in November of 2007. This Ultra Portable laptop was originally pitched to sell at $200 (which would have made it around £100), but has since increased in price until its sale price in the UK is £211.

However for a UMPC this is still very cheap.

Called the Asus Eee PC 4G (the Eee stands for Easy to Learn, Easy to Work, Easy to Play), this unit ships with a solid state 4 Gigabyte Disk with a preloaded Linux based OS, which boasts a boot time of 15 seconds. 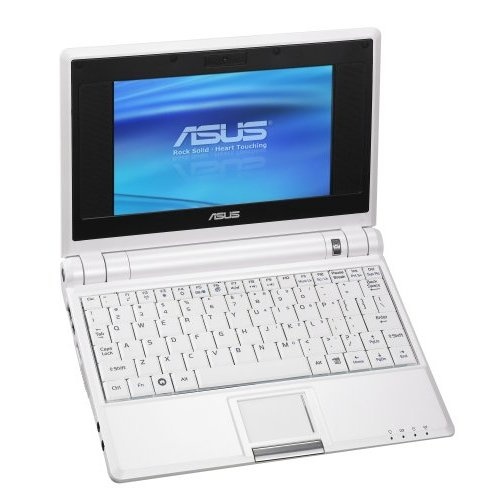 The specifications for this laptop are equally impressive for the price tag.

- 7" compact design and only 0.92kg
- Durable, shock-proof solid-state design
- Rich network and wireless connectivity
- Graphic user interface for simplicity and ease of use
- Over 40 built-in applications for learn, work and play

Mobility & Reliability
¿ At 7" and weighing only 0.92kg, you can take the Eee PC anywhere. ¿ Bumps and shocks are no longer issues. With a dependable solid-state disk, you get unparalleled shock-protection and reliability. ¿ Power-efficient design provides longer operating time when on the go.

Ease & Technology
¿ With a rapid start-up time, the Eee PC is always ready to get into action. ¿ No technical manual required with the specially designed, user-friendly and intuitive graphic interface.

Work & Connectivity
¿ You're always connected with built-in WiFi 802.11 b/g that automatically detects and connects to the Internet at any hotspot. ¿ The Eee PC includes the documents and the e-mails software, and a suite of other productivity software to help keep you on track. ¿ Upload photos and videos and share them instantly on Flickr or YouTube without waiting till you get home.

Media & Entertainment
¿ Enjoy music and videos with extensive support for a wide range of digital multimedia. ¿ Log on to Skype or other network, and you can connect with friends anywhere, anytime. ¿ Clear up wire clutter with the built-in card reader, camera, speakers, and microphone.

The Eee PC is running a version of Intel's 910 mobile chipset, it uses a 900MHz Intel Dothan based Pentium M CPU, it has 512MB of DDR2 memory, full 802.11g wireless capability, and a flash-based hard drive. There will be at least two different models of the Eee PC, with the current version using a 4GB flash hard drive and yet to be released version using a 8GB drive.

Although 4GB of storage is extremely small when you consider that the industry is shipping 750GB hard drives on the desktop and 200GB+ hard drives on the notebook front already, the 4GB flash drive keeps costs very low, and cheap external storage can very easily be added to the Eee PC. The Eee has 4 USB slots, a Media Card reader which is compatible with all major card media (MMC, etc). Also in addition to the wireless networking, the Eee has a wired NIC.

Whilst the Eee ships with a pre-loaded Linux based OS, it is capable of running Windows XP, although the small Solid State Disk will be quickly used, so it is recommended that you only install those features that you really need.

You can read more about this laptop at http://eeepc.asus.com/en/

Also there are a number of reviews on the web and several of these are listed below:http://www.hothardware.com/Articles/Hands_on_with_the_ASUS_Eee/

http://www.trustedreviews.com/notebooks/review/2007/10/30/Asus-Eee-PC-4G-701/p1
If you want to see what the Linux front end looks like, there is a simulator already on the net which effectively demonstrates most fo the screen function of the device. You can find this at http://honeypothack.com/eee/internet.htm

Anyway, within the School of Geography we have ordered one of these devices to evaluate for a range of purposes, not least of which is provision of an inexpensive fieldwork laptop which has a low replacement cost if damaged in the field. Other members of staff have already started to express an interest in this device as well.

I'll post a hands on review as soon as we have recieved this device and had chance to test it, in the mean time if you would like to have a look at this when it arrives let me know.