This is one of many help and support pages that are available about the University of Nottingham's Moodle online learning environment. If you have any questions or queries concerning Moodle then contact information is at the bottom of this one-page sheet. Please browse or use the SEARCH box below.

Peter wanted to use a couple of different tools to extend classroom conversation, to explore what he likes to term “third-space teaching”, creating an environment which is genuinely collaborative, genuinely owned by students, but which also intersects with the live experience of the classroom and locates what we are doing in a wider community of independent responsibility and gives them a sense of empowerment. He used Twitter on one module and Moodle wikis on another.

The module is Shakespeare and Jonson, a comparative early modern theatrical literature course. Important to this is the idea is now that we are entering the end of a period of relative textual stability and that when Gutenberg invented the printing press we replaced a culture of primarily oral transmission / scribal transmission with fixity printed texts. Digital media is reversing that, taking us back into a culture where people were more inclined to scribble, to compile, create multiple kinds of texts, none of which has more authority than others.

What did you do?

Peter decided to use wikis as a way of replicating the “commonplace book” – a personal log of one’s own experiences into which people would “copy and paste” quotations, references, texts, etc.  Commonplace books were objects owned by individuals but always intersecting, often shared, often passed around. The wiki is a really interesting way of replicating these ideas – a wiki does not need to be authoritative (don’t cite Wikipedia!)

The wiki was used to give students a chance to become experts in a particular contextual area of the course, log their ideas and share their ideas at an early stage. The course has two classes of 20 students, and two students in each class were given a research specialism, such as The Blackfriars, the Globe, Shakespeare’s life, Jonson’s life, boy actors etc. The students were told from day one they would be the class’s knowledge expert (“go-to person”) on this subject.

Wikis provided the commonplace book which supplemented them. All students have access to all the wikis, with the ‘experts’ taking responsibility for editing a particular one. Peter gave them starting suggestions, and specific seminar sessions which they were to  contribute to, then week by week they were required to put together wikis online. As they built up ideas they created a digital commonplace book, bringing in pictures, article reviews, summaries, diagrams and computer modules, and began critiquing the materials. 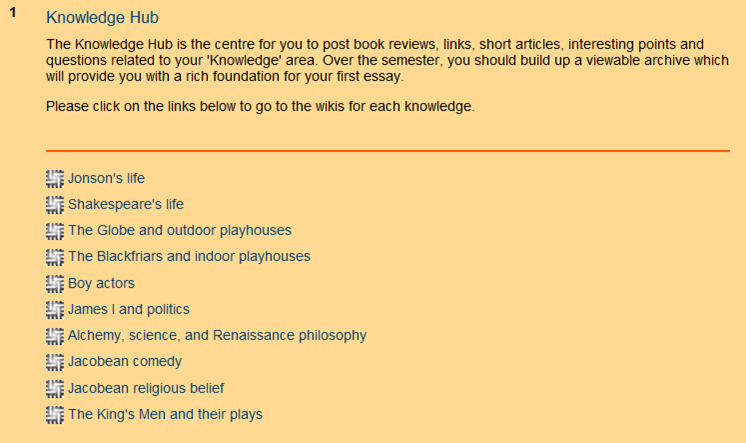 How did it work out?

This level of research was in the past carried out at the end of the module when preparing their individual essays – very contained individual sequence of tasks. The students started this in the knowledge that it would contribute to their individual essays – their research questions. The students responsible for each wiki did not meet in person, so the wiki was a third space where students in different seminar groups collaborated on these wikis, reading each other’s work, supplementing it and building together a collaborative research base much broader than any of them would have been able to achieve individually.

And as the class went on, they continued building up the wikis, using them in class. Peter could also pick up on them in class, to introduce the kind of work they’d been doing. 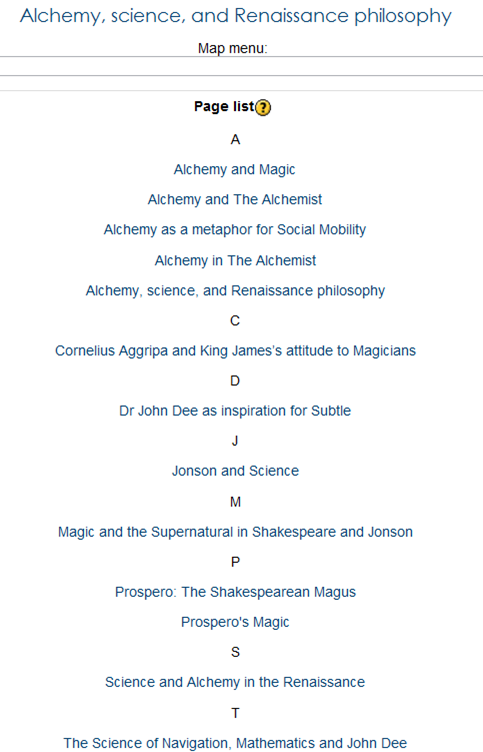 What did students think?

How to achieve this:

If you have any comments on how you think this help can be improved then please email Learning-Technologies@nottingham.ac.uk